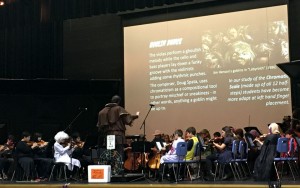 Congratulations to the LZMSN Orchestras at a fantastically frightful concert last night! Dressed as goblins, devils, mad scientists, weeping angels, and much more, the performers from the Chamber Orchestra, Intermezzo Orchestra, and Prima Musica Ensemble put on a memorable performance! rIgor’s (pronounced “rye-gore”) debut performance as conductor of the orchestras was equally memorable – though I imagine one wouldn’t have wanted to get too close as, by the looks of him, he might have been digging around in the mud just before arriving. 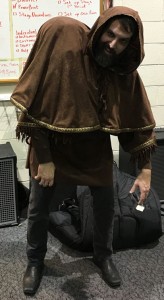 Highlights of the concert included the Intermezzo Orchestra’s robust sound – a notable feat for such young performers. With cool-heads, these sixth grade students remained poised with relaxed tempos and good eyes on rIgor, their conductor.

Next, the elite members of the Prima Musica Ensemble performed two challenging pieces which required a lot of hard work to master. After their first piece, Music of the Night from The Phantom of the Opera, a proud grandpa was overheard saying, “that was beautiful” while leaning in towards grandma. Following that beautiful rendition, Prima Musica performed a lively arrangement of Figrin D’an and the Modal Nodes’ hit song, Cantina Band.

Lastly, the Chamber Orchestra performed a musical dramatic telling of the story of Professor Wigstein’s Amazing Melody Machine (may it rest in pieces). The performers portrayed the cranking up of the machine with mechanical rhythms and sharp accents, followed by whimsical pizzicato renditions of famous melodic themes. It was as if the music was emanating from Wigstein’s cranked up machine.

Thank you to Interim Assistant Principal Larry Mishkin for a stellar introduction; Elementary Orchestra Director Mary Reitsma for pre-concert assistance; Sound Engineer Jeff Platt; the Faculty of MSN for the continued support of orchestra; the Custodial Staff for setting up; Parents, Family, and Friends for being there; and Dr. Broachenstein’s Sister Susan Samway for rIgor’s Costume Design.

Listen to the recordings of the performance at LZOrkTV!