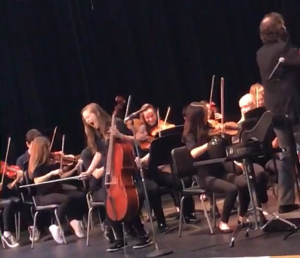 The orchestra concert last night was a great time! It was a musical celebration featuring music for singing, dancing, loving, gondoliering, and dreaming. Oh yeah, and nightmares too. The orchestras prepared their music for the past few months and showed off their hard work last night with some memorable moments. They performed music composed by Ludwig van Beethoven and other greats, such as: Franz Liszt, Georges Bizet, Jacques Offenbach, and, of course, our very own living composer-in-residence, The Viper. 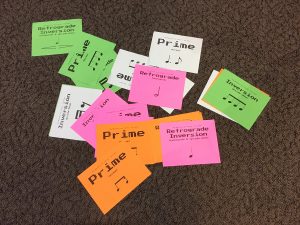 The Monsters Are Coming – The Game! (variations)

In addition to performing a handful of Classical standards, the orchestras were joined by The Viper who workshopped with students for the past few months on two of his original compositions: Just That Good and The Monsters are Coming. Along with The Viper the students help create their own arrangement of his pieces and performed them last night to an enthusiastic crowd. You can listen to all of the pieces at https://drive.google.com/open?id=0B55aOhCf7VF5VFdpNFdGcnBvQms.

I hear what you say…

Letter #1 to The Viper

Thank you for being our special guest for our concert! I loved the songs you wrote and how the parts fit with one another. Thank you for giving us violas a soli, as we don’t get many big parts in our songs most of the time. I loved the beginning of the soli and the whole 12 bar blues style in general!

Letter #2 to The Viper

something that i liked about the concert was the dramatic dynamic changes throughout the three Beethoven songs. i think that our orchestra has always done pretty well with dynamics but i don’t think it’s ever been as accurate and dramatic as how we performed at the concert. my dad hasn’t ever really played instruments and doesn’t know much about music and he even told me that he liked how we played really soft and then changed to really loud quickly. i also think jora’s scream was a good addition to the song and my family with the rest the audience seemed to really like it.