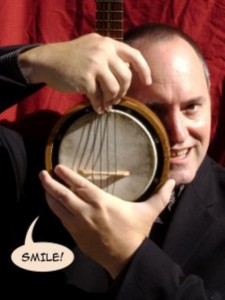 The Viper with his banjo-ukulele.

…and he’ll be here before you know it!

Mr. Broach’s longtime friend and band-mate, The Viper (also known as Dr. Ryan Jerving), will be joining the LZMSN Orchestras as Composer in Residence for their final concert of the school year, on Thursday, May 19 at 7 PM.

He will be leading the Chamber Orchestra, Intermezzo Orchestra, and Prima Musica in a series of workshops in the coming months (starting April 6) on story-telling through composition, collaborative arranging, and exploring a range of musical styles. At the May 19th concert, the orchestras will be performing several Viper songs, including some especially composed for the LZMSN Orchestras.

What music are we performing?

The Intermezzo Orchestra started to transcribe the melody to The Last Call Waltz today in orchestra rehearsal. These students are practicing how many non-classical musicians learn new music. The truth is, most musical cultures learn new music by ear – that is they hear a melody and “figure out how it goes” by playing it back and then memorizing it. So not only are students learning the melody to The Last Call Waltz by ear, but they are also transcribing what they figure out into actual musical notation on the page.

Once the Intermezzo Orchestra students feel confident with the melody, we will move on to learning bass lines as well as accompaniment parts. Once we learn these, The Viper will use these parts (melody, bass, accompaniment) to create a unique arrangement of the tune for our orchestra!

Here is a version of the song as it was recorded for a Norwegian fishing show (which was never produced, unfortunately). The bass player you hear in this recording is now an Emmy-nominated composer, Dave Wesley, who composes music for The Family Guy and other TV shows and movies. In other words, not Mr. Broach!

The Last Call Waltz (original recording, in the Key of F)

The Last Call Waltz (digitally transposed to the Key of G, the key in which we will perform)

The Chamber Orchestra has already begun learning the three melodic themes in a Klezmer style (Hotzeplotz Calls, The Viper’s Bulgar, and Hoffle Poffle) as well as a simple bass line. Klezmer music is the style traditionally played at Jewish celebrations. The medley essentially grew out of music that The Viper & His Famous Orchestra pulled together for Mr. Broach’s wedding in 2013.

Once the orchestras learn all the themes as well as the bass lines and accompaniment parts, The Viper will work with us in rehearsal to create an arrangement tailored to our mix of musicians and instruments.

Listen to The Viper & His Famous Orchestra perform Hotzeplotz Calls on a live radio broadcast for WMSE in Milwaukee, Wisconsin. That’s Mr. Broach on the violin – be sure to talk to him about his intonation!

The Viper contemplates the fleeting nature of the seasons, time, and life itself in Let Not Life Far From These Fingers Flee. Plus, the fact that his Dog Has Fleas.

Gesturing at the Baroque tradition, the piece is a Concerto Grosso with a small solo orchestra (including The Viper on ukulele) and a larger accompanying orchestra. Undoubtedly, The Viper was influenced by Antonio Vivaldi’s The Four Seasons in composing this piece as, not only, is it a Concerto Grosso, but it also directly quotes the melody from Autumn.

The smaller solo orchestra (called the “concertino”) will be performed by the Prima Musica Ensemble and The Viper himself, while the larger accompaniment orchestra (the “ripieno”, literally translating to “stuffing”) will be performed by the remaining Chamber Orchestra members. And there are few non-Baroque surprises along the way. “It’s the cat’s pajamas,” says The Viper.

Listen to a computer generated audio file of the tune below which gives you a glimpse into the process of how many people compose today (The Viper uses a free open-source software called MuseScore). You’ll hear some of the limitations of this process: the singing parts are not actually sung, but are computer generated, “aaah” syllables. Also, the ukulele sound is pretty lacking. All around the tone quality isn’t good, but you can get the idea and it’s useful for practicing.

The Viper is looking forward to hearing the sounds in his head on real instruments played by our skilled LZMSN musicians.

It’s Going to be Another Day

I’m not sure what The Viper has planned for this one. He’s playing pretty close to the vest. All I know is that everyone will be playing along on this one as a finale. We’ll just have to wait and see!

Want to know more about The Viper? 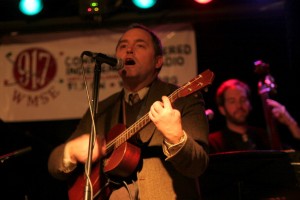 1 thought on “The Viper is Coming…”