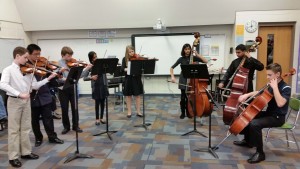 Prima Musica is an auditioned ensemble that meets once a week after school. Students are required to learn much of the challenging music on their own outside of rehearsal.

The ensemble is an outlet for students who thrive on more challenging music as well as taking greater ownership in the collaborative performance ensemble process. These students work hard on their instruments inside and outside of school. To them, there is no musical boundary of “what happens in school” vs. “what happens at home”. They strive to create meaningful performances with like-minded performers.